TWO YEARS FOLLOWING HER BREAST CANCER DIAGNOSIS, TARYN CLAIRE LE NU HAS EMBARKED ON A NEW, AND UNCONVENTIONAL, PATH AS AN AUTHOR.

“Often after a cancer diagnosis, people lose their sense of identity,” Taryn says. “So, I’ve created a new one. Each day you step up and make a choice, and I have taken the opportunity to turn it into a creative endeavour.”

At 41, Taryn was diagnosed with a cancer usually found in older women who have used HRT, and she is now determined to spread awareness about the different methods women should use to check their breasts.

“There are other cancers that don’t present as a lump,” she explains. “Mine is invasive lobular carcinoma. It doesn’t have the glue that holds a cancer together, it presents as a spider’s web.”

“You’re not just looking for a lump, but thickening of the breast.”

To keep family and friends informed, Taryn started a blog where she candidly shared her experience as she decided on treatment options, including chemotherapy and a double mastectomy.

“I am passionate about telling women what doctor’s don’t”.

“Following a diagnosis, you have to give a lot of people your story, and each time you do it’s traumatising,” she says. “This was a way I could tell everyone at the same time. After a while, people would add family or friends who had been diagnosed, and then started asking for a book.”

Taryn decided to immerse herself in an author retreat, which gave her the guidance and time-frames to keep her accountable.

“The conversion from blog to book was a relentless pursuit of reconfiguring and required considerably more effort. There were times when it felt like I had taken way too big a bite.”

Not only was Taryn now navigating the road as a first-time author, but also adjusting to life after chemotherapy.

“Chemo has fried my brain,” she says. “The way I process information has changed in not so subtle ways. I would get extremely frustrated with myself when things that used to be easy for me were noticeably trickier or more time consuming.

“I would misunderstand a LOT of things. Eventually I learnt to pick up the phone and simply chat things through. There were times where my team had to explain the same thing to me three times during a conversation for me to fully comprehend a process. I had to keep thanking them for their considerable patience with me.”

Her book, To Cancer With Love – Diary of a Doctor’s Unconventional Wife, is a raw, funny and captivating glimpse at traversing the terrain that is cancer. Launched to a wave of love and support last month, Taryn notes that the work is just beginning.

“There is no point in writing your book unless you’re going to put in the effort afterward to market it,” she says.

“Once the book is done you are tempted to sit back and relax, but you can’t sit around waiting for the book to sell itself.

Taryn has plans for more books in the series of A Doctor’s Unconventional Wife, with the second book, To Chemo With Love due to launch late 2019.

Strong voice for women a hit 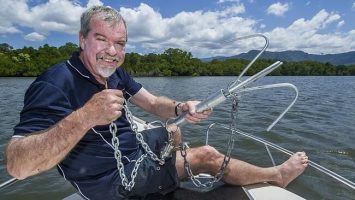