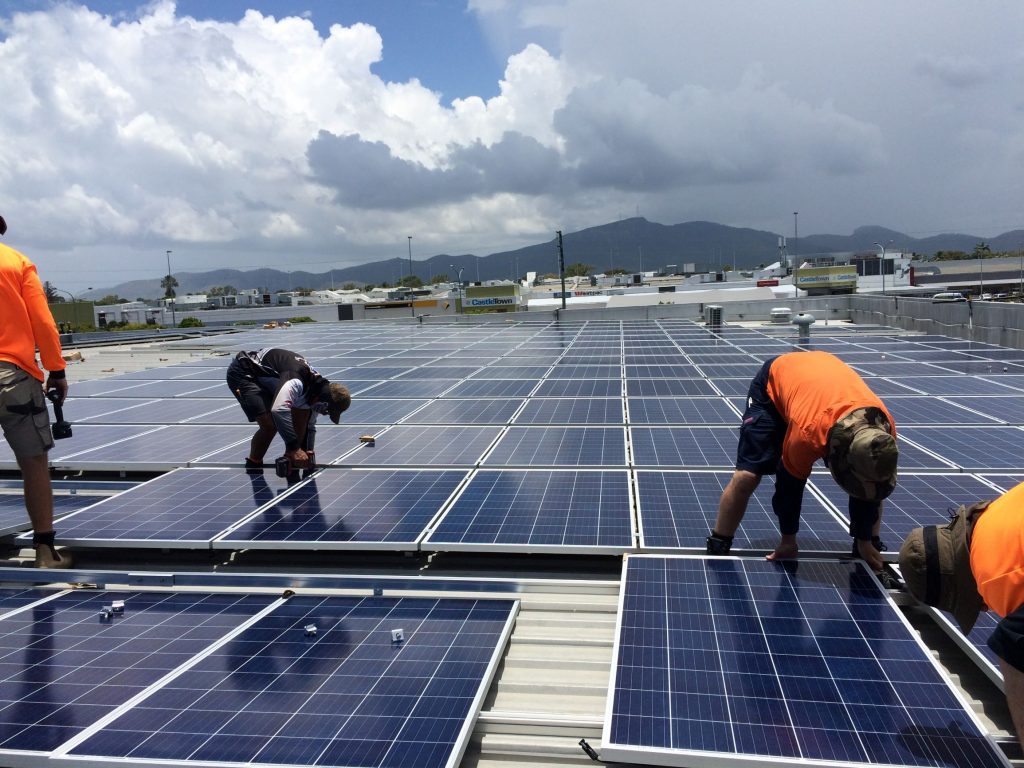 As the sunniest city on Australia’s East Coast, Townsville is fast becoming Queensland’s renewable energy capital. With rising electricity costs and a considerable decrease in the price of installing solar systems, solar power has become a popular and cost-effective alternative in the region. This shift to a clean economy is establishing North Queensland as a thriving renewable energy hub, with Townsville businesses at the forefront of this movement.

Electricity bills for Townsville businesses are commonly between $2,000 and $7,000 per month. Not only does this fluctuate seasonally and skyrocket during the summer months, but it also means that the majority of businesses’ hard-earned profits are being set aside to cover the costs of electricity.

This was the case for owner of Chipmunks Playland and Cafe, Ian Wattie, who engaged SuperGreen Solutions to install a 99kw solar power and LED lighting system after he received his $9,000 electricity bill in December of 2017.

“Our costs were just through the roof and we couldn’t sustain that level of debt,” explains Ian.

“We knew we had to make a big change because otherwise we weren’t going to be able to continue the trade with those kinds of overheads.

“We engaged SuperGreen Solutions who estimated that with solar we would save around $30,000 in energy bills in the first calendar year alone – their calculations were spot on.”

The year following the installation, Ian’s electricity costs dropped from $94,968 in 2017 to $29,582 in 2018. Ian has already paid off the cost of the solar array and to date has saved more than $60,537 on power bills over three years. He and his team are continuing to reap the benefits of achieving sustainable economic growth, with the business on track to save a total of $300,000 during the term of their 10-year lease.

“It’s no exaggeration when I say it changed our lives and saved our business,” says Ian.

“We were cash flow positive from day one and I have never used my own money, instead I simply diverted what I was paying for power to finance the system.

“Previously we had energy bills around $9,000 during summer and $4,500 in the cooler months, however, the worst bill we’ve had since installing solar is $1,863 during the period of continuous rain.”

The results were so cost-effective that B-Fit gym next door also installed solar panels as part of their lease agreement. Owner of SuperGreen Solutions, Sean Cochrane says these results are not uncommon for local businesses, with many eager to take advantage of Townsville’s solar potential.

“Installing solar enables you to use energy and resources more efficiently and find ways to mitigate existing waste streams that have long-term economic impacts on your business,” explains Sean.

“Townsville has one of the highest solar potential on the planet and businesses owe it to themselves to look into this option as a way to cut down their costs.

“By installing solar, businesses can reap huge long-term economic benefits in an environmentally friendly manner that can often be the difference between keeping the doors open.”

With 80% of businesses in Queensland leasing their spaces, Sean says it can be difficult for tenants if the landlord refuses to partner in the solar costs. However, he says more can be done to capture the full benefits for both parties by simply having a conversation about solar and its mutual benefits.

“The first step is to have a conversation with your landlord and look at all the options available that will benefit both parties,” he continues.

“Ian is a great example of a tenant who could work and negotiate with his landlord owner to achieve greater cost-saving outcomes that would benefit them both.

“Chipmunks Café and Playland reduced their costs dramatically which meant they re-signed the lease for a longer time period. Whilst Ian now owns the solar panels, there is a high chance they will remain on the roof if he decides to leave which benefits his landlord.”

Thanks to a new Federal Government initiative designed to accelerate Australia’s trajectory towards a future with renewable energy, there has never been a cheaper time for businesses to make the switch.

“I encourage business owners to have a look at the ongoing solar rebates from the Federal Government that assist businesses with funding energy efficiency projects,” continues Sean.

“Businesses can also download Eco-biz, a free app designed to give them a quote on their potential solar installation costs or alternatively they can come and chat to a local solar provider to see how they can make their business more cost-effective.”

“In a place like Townsville, the opportunities for solar are endless. When you look at the huge cost-savings from local businesses who have installed solar, who wouldn’t want to make the switch?”

Georgie is BDmag’s resident writer who is passionate about entrepreneurship, sustainability and regional affairs. She is preparing to study with The School of The New York Times later this year before commencing her journalism qualifications.
PrevPreviousAccelerating Social Entrepreneurs Across North Queensland
NextGlowing Skin For Townsville LocalsNext